Cancer immunotherapies can be broadly categorized into four classes:

A contributing factor to tumor heterogeneity, de novo somatic mutations frequently arise in cancer cells. Because the mutations may be absent from the normal human genome, peptides derived from mutated regions of the cancer genome can be immunogenic if presented by major histocompatibility complex (MHC) molecules. These so-called neoantigens can be administered as a vaccine in order to elicit a T cell response against the tumor.

A 2014 preclinical study demonstrated the power of using bioinformatics to identify neoantigens. First, whole exome and RNA sequencing were performed on mouse tumor cells. By comparing the whole exome data to the mouse reference genome, the researchers identified mutations specific to the cancer cells. They then used RNA sequencing to confirm which mutations were actually expressed by the cells.

To evaluate the immunogenicity of the mutated peptides, the researchers immunoprecipitated MHC molecules and analyzed them with mass spectrometry to determine which peptides were presented as epitopes. An algorithm was then used to predict interactions between the putative epitopes and T cell receptors. The final subset of mutated peptides was administered to mice, and the resulting CD8 T cell response against tumor growth showed that the peptides were productive neoantigens. 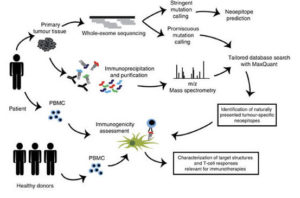 A pipeline to predict neoantigens from whole-exome sequencing data and evaluate their immunogenicity. Adapted from Bassani-Sternberg et al. 2016.

As neoantigen vaccines undergo further development for cancer patients, bioinformatics pipelines will play a key role in the technology for one major reason: most tumor mutations are patient-specific. As a result, sequencing must be performed on the tumor and normal cells of each patient in order to identify their unique neoantigens. A robust pipeline to analyze sequencing data and call variants will serve as the foundation of these personalized vaccines.

The checkpoint pathways that regulate immune cells can be co-opted by cancer cells to evade immune attack. For example, cytotoxic T-lymphocyte-associated protein 4 (CTLA-4) is a checkpoint receptor that, when bound, downregulates the immune response. Because some cancer cells upregulate CTLA-4 expression, a successful immunotherapy strategy is to inhibit CTLA-4. One such therapy, the monoclonal antibody ipilimumab, has demonstrated long-term clinical benefit for 20% of treated patients with metastatic melanoma. In order to better understand the patient predictors of clinical benefit, a 2015 study employed a number of genomics approaches. 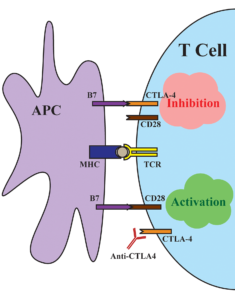 Other studies have shown similar results for how tumor genomes impact the effectiveness of ipilimumab, and Boussiotis has proposed a mechanistic explanation for these observations. During the immune response, tumor-specific T cells are activated when neoantigens are presented. Activated T cells express more CTLA-4 on their cell surfaces, such that CTLA-4 is accessible to be bound by ipilimumab. If tumors do not have presented neoantigens, then tumor-specific T cells are not activated; CTLA-4 does not accumulate on T cell surfaces, so ipilimumab has no effect.

As the therapeutic field of immune checkpoint inhibitors matures, bioinformatics studies will be important to the drug development process. Bioinformatics analyses can provide insight into how current therapeutics work, as well as identify gaps to be addressed by future generations of therapeutics.

Impact of bioinformatics on cancer immunotherapy

Bioinformatics methodologies play an important role in all aspects of cancer immunotherapy development. In the case of neoantigen vaccines, bioinformatics is an essential part of personalizing the therapy to each patient. Bioinformatics can also be used to refine treatment, as is the case with studying why ipilimumab is only effective in a subset of patients.

As the field of cancer immunotherapy moves forward, implementing efficient and reproducible bioinformatics pipelines will be crucial to success. At Seven Bridges, we design our products—including the Seven Bridges Platform—based on these principles. Together, our products and team of experts are prepared to facilitate bioinformatics studies at all stages of drug development.