The representation of the human reference genome as a linear haploid DNA sequence poses limitations when trying to incorporate the known genetic diversity of human populations. This has led to the development of graph-based references, able to naturally represent all polymorphisms, including insertions, deletions, and structural variation.

Seven Bridges GRAF™ Suite utilizes advanced data structures to generate directed acyclic graphs and is a fundamental rethinking of how genomic variation data is represented. Unlike standard linear references, this structure makes use of information from an entire population to characterize genetic variants with unprecedented accuracy. Graph structures have the potential to learn from every new individual sequenced, meaning that the graph-based reference can improve with each additional genome. Better still, this improvement happens with only minimal increases in file size, allowing analysis of genomes at population scale. 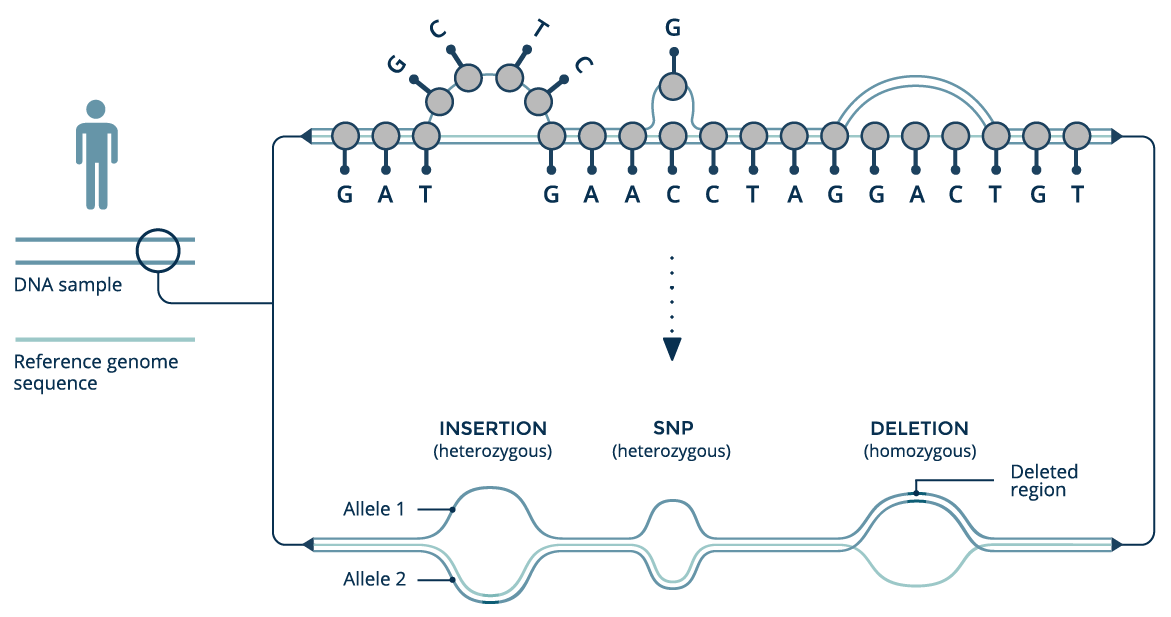 The GRAF™ Pan Genome Reference organizes genomic data from a population into an edge-based sequence variation graph. In such graphs, edges are the primary data carrier elements and alternative haplotypes are represented as different paths through the graph. The linear reference assembly forms the graph backbone, and additional variants are added as new edges in the graph. A longer genomic haplotype can be obtained by following a path through the graph and concatenating the (sub)sequences contained by the visited edges. We call this structure a genome graph.

A graph genome reference can contain both small variants (SNPs and indels up to several dozen base-pairs in length) and the larger structural variants, which are typically difficult to identify using short-read sequencing technologies. Consequently, graph references provide a framework to both accurately detect structural variation and reduce the error rate in calling small variants.

Find out how to build a better reference genome

Seven Bridges GRAF™ Suite enables accurate variant calling — the process of determining the set of genomic variants present in a sample. Current state-of-the-art variant callers are based on local reassembly of reads mapped in the region surrounding a putative variant. This approach significantly improves the accuracy of variant calls but is limited by the choice of size of the reassembly region, and the size of the expected assembled contig. If these values are set too small, variants can be missed. If these values are set too big, it can be computationally prohibitive.

Using GRAF™ can alleviate these issues, as reads which are partially aligned to a known variant edge allow for better adaptive selection of the necessary reassembly window as the edge from a graph reference contains information regarding its size. Furthermore, GRAF™ enables a completely different paradigm in variant calling — for variants present in the graph, sequence and the location information is known, thus it is possible to genotype directly against the graph.

The GRAF™ Aligner utilizes a pan-genome graph structure, created by augmenting the reference genome with a set of known variations, significantly reducing the effects of reference bias. The graph genome incorporates variants from a variety of sources, including the 1,000 Genomes Project and the Simons Genome Diversity Project. By preserving all of the variant information, GRAF™ facilitates better alignment than linear alternatives, resulting in more accurate variant calls.

Learn more about aligning reads to a reference graph