Last week Seven Bridges Program Manager Jack DiGiovanna went back to school, to deliver a pair of guest lectures to the Genomics of Cancer honors-level class at William Tennent High School in Warminster, PA. The ~30 students in the class are a mix of Juniors and Seniors, and as far as we know, William Tennent is one of the only high schools offering this high school cancer genomics class.

“I borrowed a lot from a program at Fox Chase called Immersion Science developed by Dr Alana O’Reilly,” says Ignacio Jayo, who developed and teaches the class. “I have also had a tremendous amount of help from Dr Amanda Purdy, also from Fox Chase, who runs the TRIP Initiative for high school students. I wouldn’t have been able to develop or run this course without Immersion Science as well as the ongoing support from Amanda.”

As part of the class, the students have collected plant samples and then done PCR amplification and processing with a BioRad Explorer Series kit. The processed samples were sent out for sequencing and the assembled sequence returned. Students then used BLAST to match to the nearest species, correctly identifying the source plant species.

Genomics in a nutshell

In the first lecture, Jack led the students on a quick journey through all things genomic. He first discussed next-generation sequencing technology, read alignment, and variant identification, in order to relate the students’ plant samples to the technology for processing them. 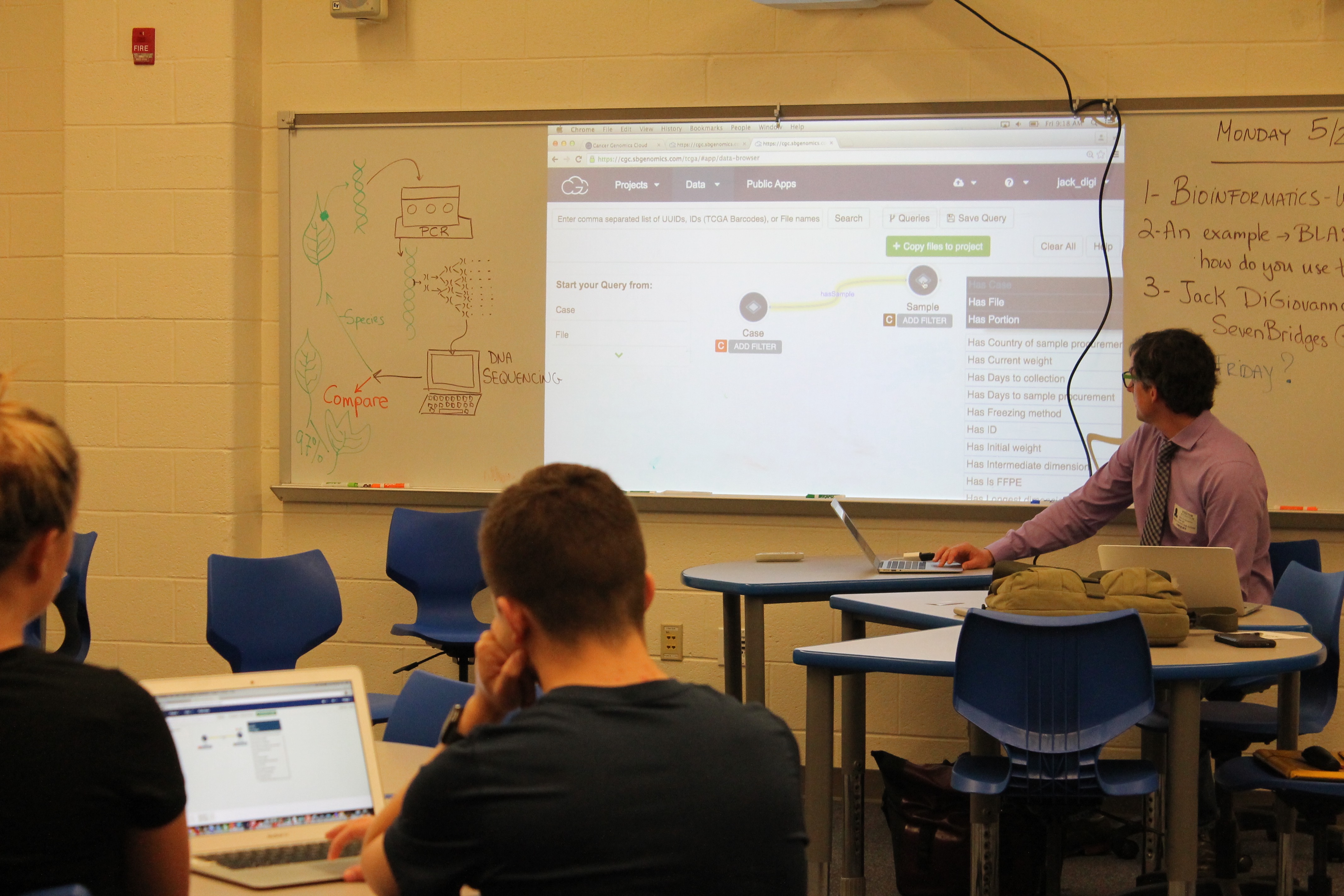 Jack went on to describe association studies for finding genetic variants associated with disease, and national scale precision medicine initiatives. He wrapped up the lecture by leading a discussion of career paths in genomics.

Jack’s second lecture focused on cancer research. He began by introducing the Seven Bridges Cancer Genomics Cloud (CGC), and showing off some of its features including data browsing and visualization. Jack described The Cancer Genome Atlas (TCGA) dataset, a comprehensive molecular characterization of 33 types of cancer from over 11,000 patients. He concluded by showing that cancer cells can have different gene expression from normal tissue, and how the CGC can be used to identify such abnormal expression.

The students then spent an intense 40-minute hands-on session with the CGC using their own accounts. Jack walked them through the steps needed to create a project, add a tool, and use the data browser to gather normal and tumor gene expression files, and analyze differential gene expression. 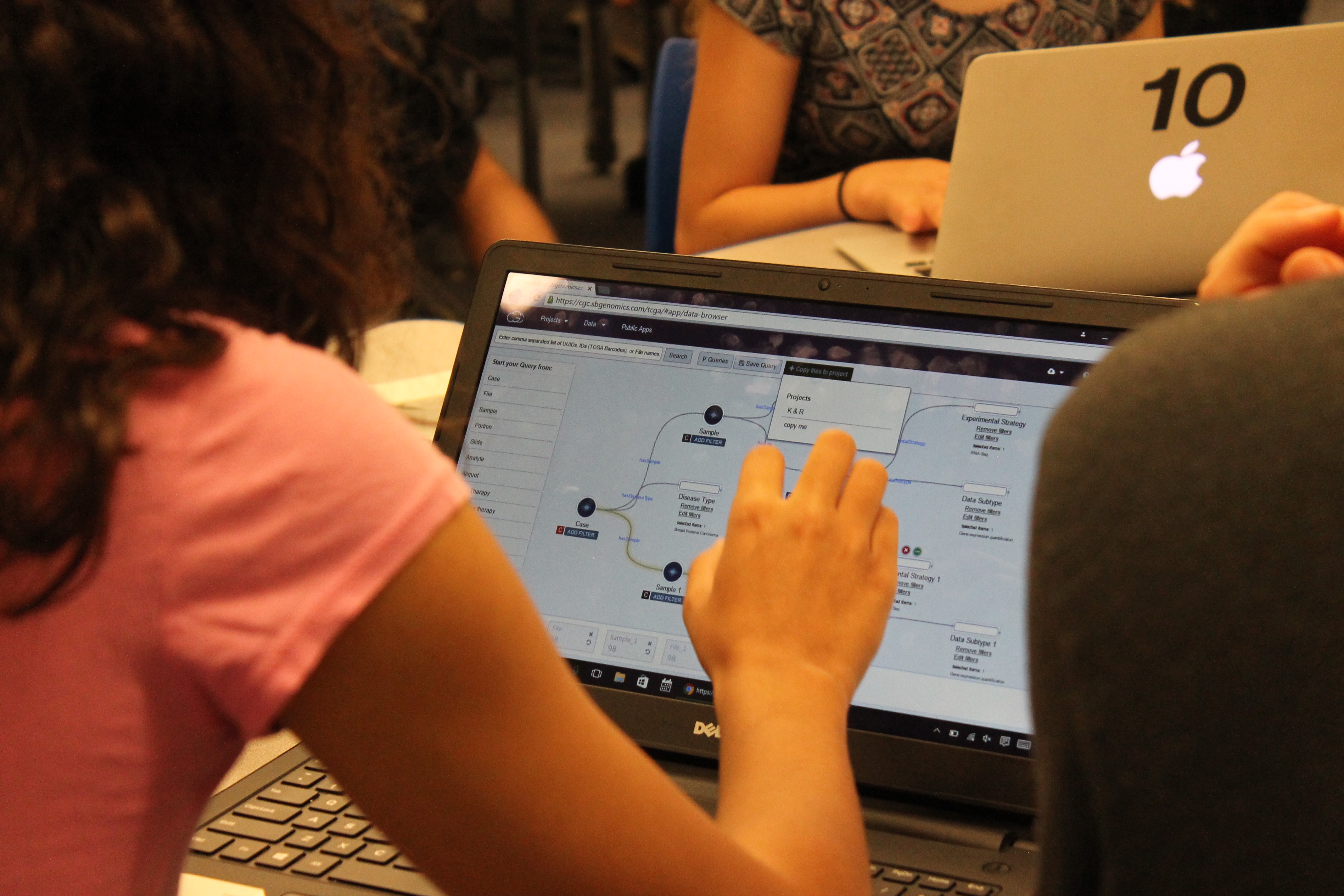 Finally, the students plotted the most over and under expressed genes in tumor relative to normal, finding the top three genes with enhanced or reduced expression in a range of cancers and cases.

I liked the fact that such a difficult concept such as sequencing was made simple to understand. I also liked that we were able to use the CGC and compare tumor samples to normal tissue samples. That was really cool.

Our take home message from the lectures: we were able to get a group of motivated and bright high school students analyzing cancer data (of their choice) within ~90 minutes. Jack covered a huge amount of ground, and we’re really impressed the class managed to digest so much material in a short space of time! 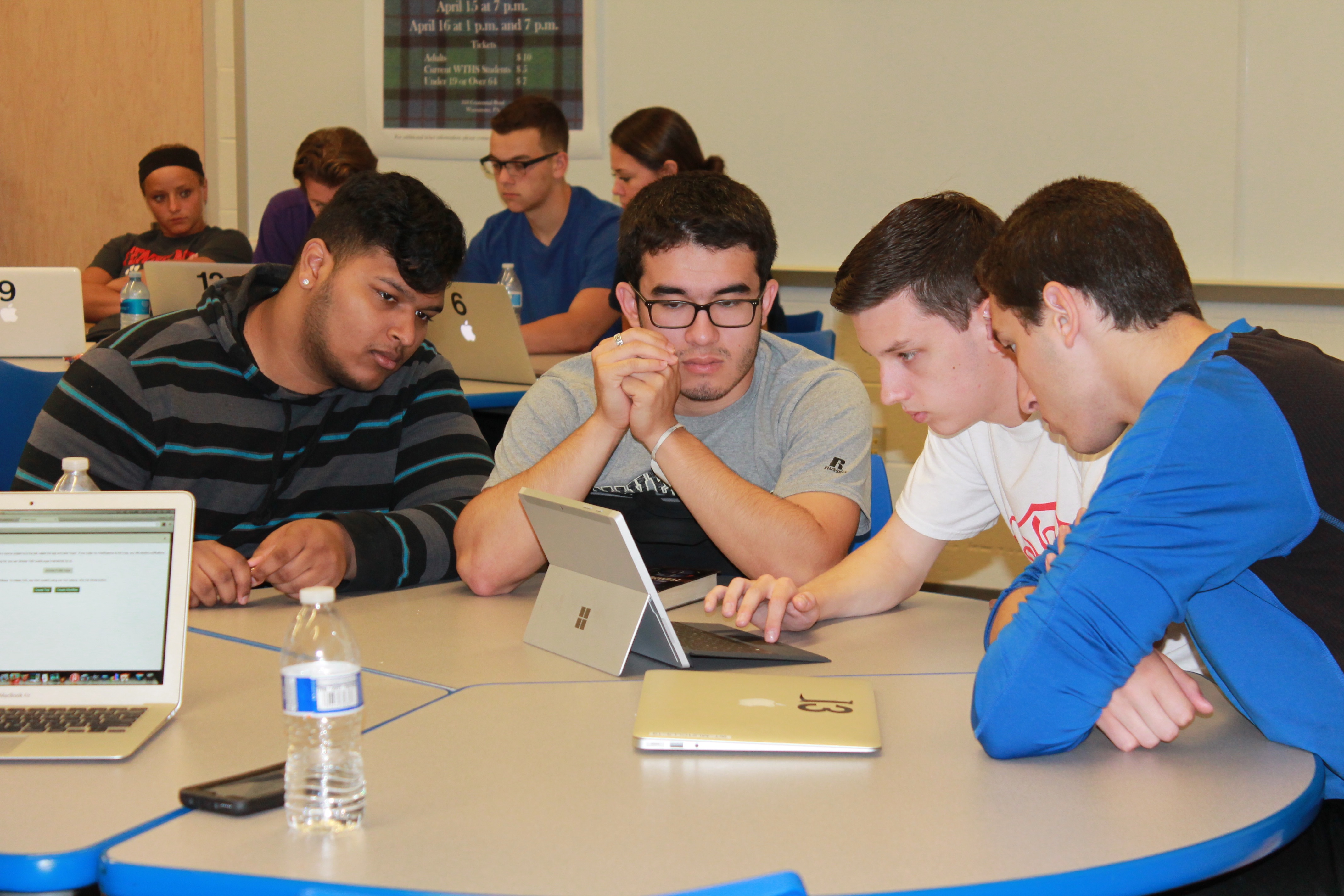 “It was a very thorough and meaningful introduction to bioinformatics, which is an area that students do not get exposed to,” says Jayo. “I also liked that having access to the CGC empowers students and has them working on real-world relevant problems. What better way to learn about sequencing than to have students work on actual tumor sequences while getting advice from industry professionals?”

Ignacio and Jack are keen to continue this collaboration, potentially inviting other nearby schools. Ideally, instead of a two-day sprint, students would learn the basics of the CGC over a week and then have a guided analysis session with Seven Bridges.

We are gratified that the students were able to make use of the CGC and especially to see its potential as a tool for learning about key concepts in cancer research:

I learned that there is a push to involve young people in the process—this alone grabbed my attention and made me want to make a change. Most times, we are told that we “don’t know enough” or are “too young to learn”.

When we ran a hackathon to introduce the CGC to college students and professional scientists we did so over three days. We therefore asked a lot of the William Tennent students to be doing cancer genomics research within 2 hours. Fortunately they came through the test!