The variant filtering process consists of selecting highly confident variants and removing the ones that are falsely called. Secondary genomic DNA analysis is mainly oriented toward alignment and variant calling, assuming the accuracy of these two would provide a major influence on the overall quality. The variant filtering step used to be mostly left out from deeper testing, even though it can boost precision of variant calls significantly. Smart Variant Filtering (SVF) uses machine learning algorithms trained on features from the existing Genome In A Bottle (GIAB) variant-called samples (HG001-HG005) to perform variant filtering (classification).

SVF is available on Github and also as a public project on the Seven Bridges Platform. It is completely open-source and free to use by any party under a Modified BSD License. The comparison results obtained during deep, 3-stage testing demonstrate that SVF outperforms the solutions currently used within most secondary DNA analyses. Smart Variant Filtering increases the precision of called SNVs (by removing false positives) for up to 0.2% while keeping the overall f-score higher by 0.12-0.27% than in existing solutions. Indel precision is increased by up to 7.8%, while the f-score increase is in range of 0.1 to 3.2%.

Getting Started with Smart Variant Filtering

The entire process of using the SVF algorithm consists of the following stages:

The purpose of this stage is to create a dataset with features which will be used by the machine learning algorithm to perform classification. Reads from GIAB HG001-HG005 samples with available truth sets (gold standard variants) are processed with variant calling workflows generating raw Variant Calling Format (VCF) files.

Features from raw VCF and the correctness flag from the annotated VCF (TP or FP) are filled into the table (Tab Separated Values file) suitable for model training. As an initial set of SVF features, we have selected the ones recommended in the Broad Institute’s Best practice Hard Variant filtering for GATK Whole exome workflow: QD, MQ, FS, MQRankSum, ReadPosRankSum and SOR.

Another optional feature added to the table is the information about the existence of the variant in known variants database (dbSNP). The Smart Variant Filtering – Prepare Features workflow that creates a table of features shown in Figure 1. Table 1 shows an example of the features table used for training a model.

Table 1: The example of the features table.

The process of training a machine learning model (classifier) is performed using the python sklearn library. The tables with features from all samples with truth-set VCF available (HG001-HG005) are first merged together for learning and then split into SNVs and indels.

The training of the machine learning model is performed with a highly configurable Smart Variant Filtering tool by maximizing the separation between TP and FP samples (Figure 2).

This tool wraps two Python scripts (available on Github) – one for training and one for applying the filter. The tool also offers the possibility to switch between two operating modes.

In the training mode, the tables with features are provided as an input and the obtained filtering model is written to an output file that can be used when applying the filter in the next stage.

When in the filtering mode, the Smart Variant Filtering tool receives the VCF file together with trained models for SNVs and indels as inputs and creates a filtered VCF (Figure 3). SVF reads desired features from the Info field for every variant of VCF file and, using a provided models, decides whether it is TP or FP. If variant is classified as FP then SVF will mark it in the Filter field of the output, filtered VCF with labels SVF_SNV or SVF_INDEL.

If some of the filters exist in the VCF it is possible to discard all of them during filtering (discard the existing filters). By default SVF will keep them or overwrite them with SVF label if the classifier made such a decision. Another option is to force keeping the variants found in the input database (dbSNP). 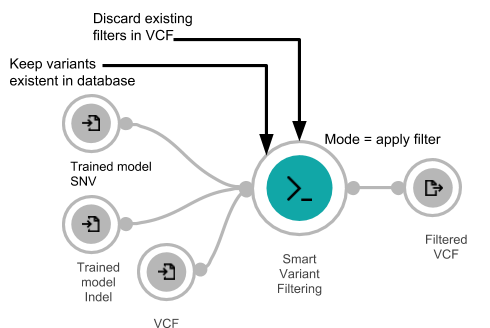 Figure 3: Smart Variant Filtering tool with inputs and outputs.In order to speed up the filtering process, the input VCF can be divided into smaller VCFs by chromosome contigs and a separate processing job can be performed for each part of the VCF.

Finally, all VCF parts are merged creating a filtered VCF. These operations are performed inside the Apply Smart Variant Filtering Parallel workflow.

Another operation performed by this workflow is addition of information about every variant’s existence in known databases such is dbSNP.

The testing of the SVF has been done in three separate phases. The first phase was searching for the best classifier and its configuration.

The second phase was testing of the quality (precision, recall, f-score) using leave-one-out sample strategy. The third phase was independent validation. Each phase is described in the following sections.

Table 2: List of classifiers and corresponding parameters used for testing of the SVF performance. All possible parameter combinations within same classifier are tested for both SNVs and indels.

An example of a configuration would be: AdaBoost Classifier{n_estimators=50, learning_rate=1, algorithm=’SAMME’}.

For every configuration from Table 2, a cross-validation with 10 folds has been conducted across a total 123.000 variants. F-score was used as the criteria for the model’s configuration quality and mean and standard deviations are calculated for 10 f-scores obtained for every parameter configuration. Due to intense computational demands, the entire testing process is done on the Seven Bridges Platform with a downsampled set of whole genome samples.

The differences in mean f-score and the standard deviation between top parameter configurations are minor. The obtained best configurations from the experiment are shown in Table 3.

After obtaining the best configuration, the second testing phase of Smart Variant Filtering can be performed.

To fully automate the entire flow (training, filtering, testing), we have created the Train, filter and test workflow (Figure 4).

Train and filter parts are described in the previous sections, while the test part consists of the VCF Benchmark workflow with the VCFEval tool which calculates precision, recall and f-score values by comparing filtered VCF to truth set VCF file.

The second phase of testing is performed using tables with features from all samples and library preparations, except the one on which the filtering is performed. This process is known as leave-one-out testing (e.g. train on HG001-GH004 and test on HG005).

A separate training and testing is performed for SNVs and indels using the following 6 features: QD, MQ, FS, MQRankSum, ReadPosRankSum and SOR.

Precision/recall diagram for SNVs with whole genome samples is presented in Figure 5.

An ideal variant filter would increase precision to 100% without any decrease in recall – a horizontal shift to the right from the gray dots in Fig 5. In a real world setting, variant filtering should make a larger increase in precision than the cost in recall. This is well captured by a single metric – the F Score. VQSR, the Broad Best Practices variant filter, does increase precision but decreases recall from 0.1 – 0.5% at the same time. In contrast, SVF has greater or equal increases in precision with minimal decreases in recall, as expected for the filtering process.

General comparison in the quality of calls can be seen through f-score comparison of these methods (f-score = 2*((precision*recall) / (precision+recall)) ), as shown in Figure 6.

Precision/recall diagrams for indels with whole genome samples are presented in Figure 7. 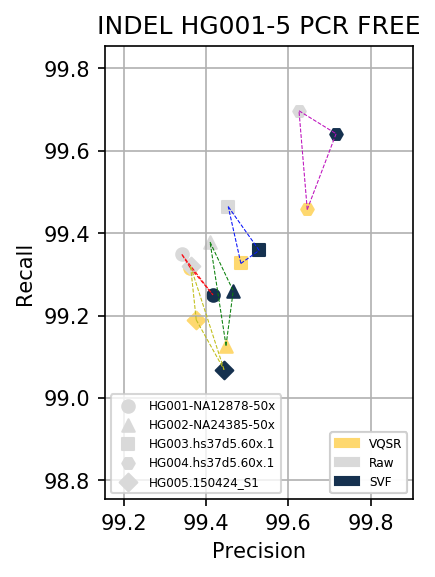 As with SNVs, SVF for indels has shown significant increase in precision and minor decrease in recall compared to the raw variants. Also, VQSR method decreases the recall and gives lower precision than SVF with samples (Figure 7). General comparison in the quality of calls can be seen through f-score comparison of these methods, as shown in Figure 8.

Precision/recall diagrams for SNVs and indels with whole exome samples are presented in Figure 9 and Figure 11, while f-scores are given in Figure 10 and Figure 12. Training was performed using the following seven features: QD, MQ, FS, MQRankSum, ReadPosRankSum, SOR, dbSNPBuildID. 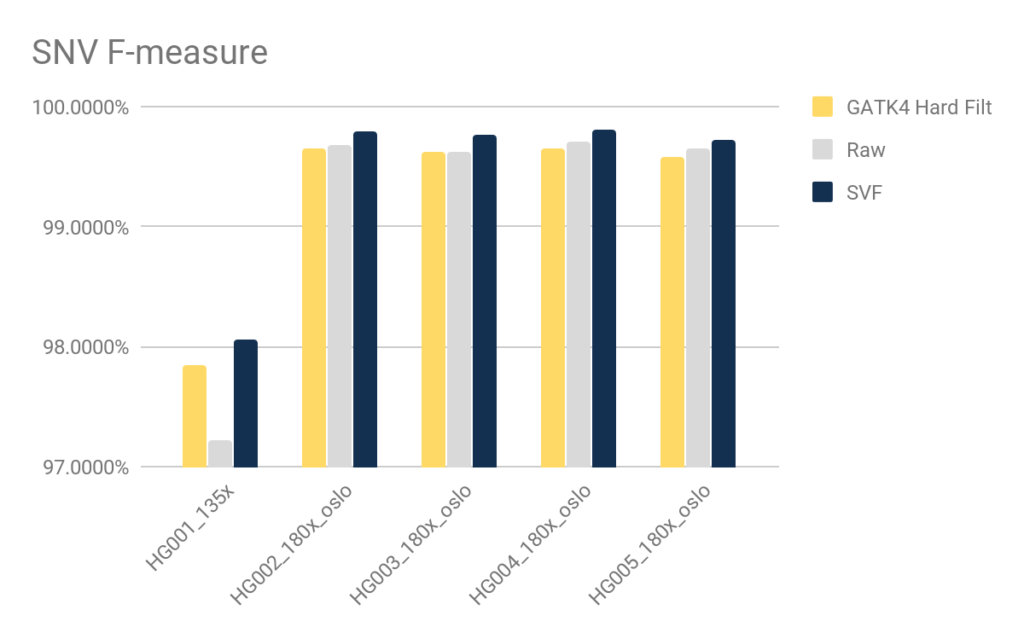 The third phase of testing is an independent validation on samples where no portion of the data was used to train the SVF filter. This creates a larger testing set and better evaluates SVF generalization relative to using a large portion of a sample for training and testing performance with a previously unused portion of the same sample.

Figures 13-16 show the f-scores for SNVs and indels, WGS and WES, obtained from the new samples using the filtering models from leave-one-out testing. A similar trend in f-score across all previously created filtering models demonstrates that SVF provides generalization in usage different training sets. Also, Figures 13-16 confirm the robust and stable performance without any bias.

How to use Smart Variant Filtering?

The Smart Variant Filtering tool is available within public projects on the Seven Bridges Platform. After making a copy of the project, a user can utilize SVF in several different scenarios: